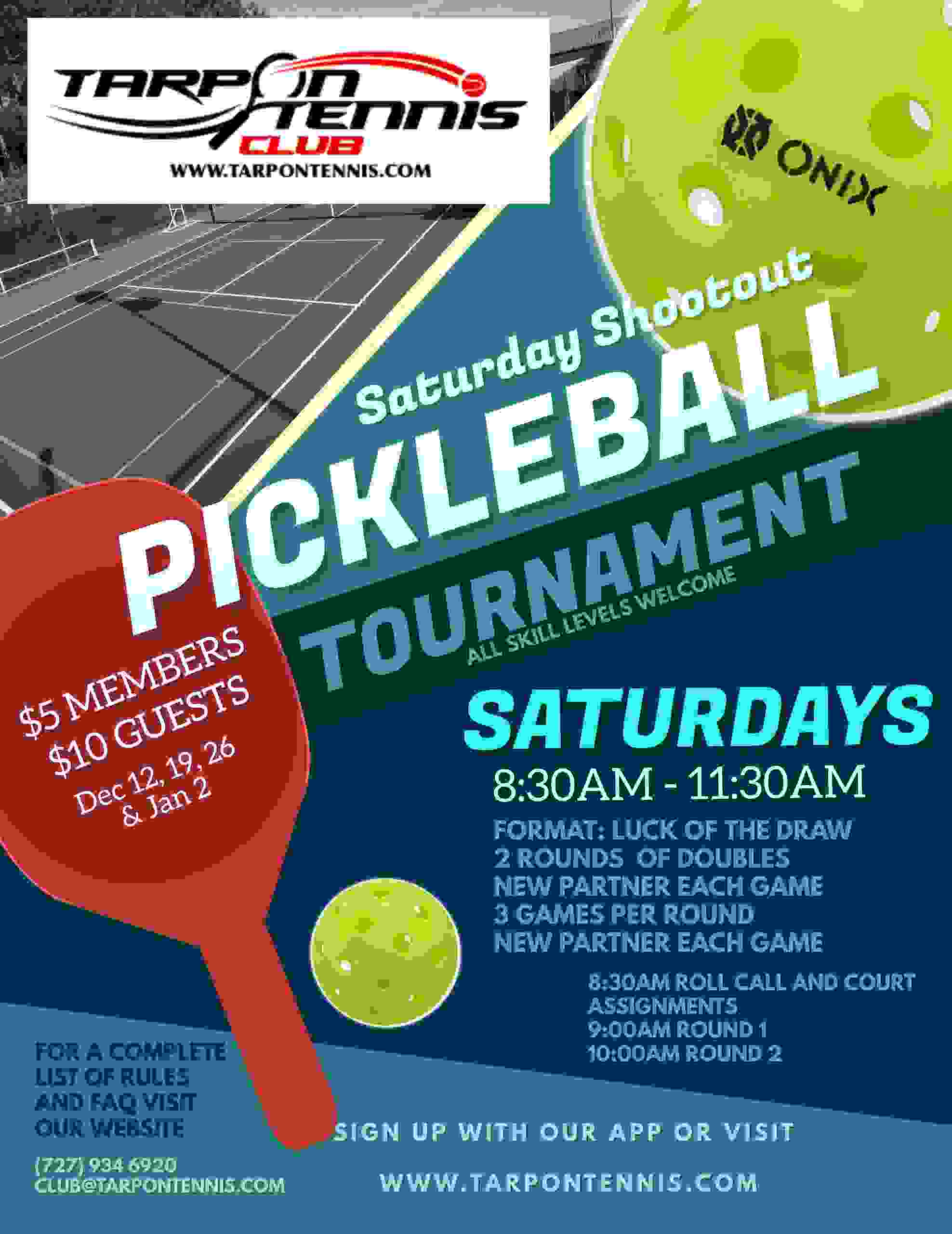 We will have two rounds of round robin play. Each round will take about 1 hour or more to play. So on a shootout day, you should plan on playing for about 2- 2 1/2 hours.

On the day of game play, the leader (Tarpon Staff Member) will fill out one “Shootout Sheet” for each court. Court 1 will have your highest level skilled players, Court 2 will have the next level down, and so on. However, for now, let’s not worry about how players are assigned to which court, this will come later when we discuss the Ranking Assignment.

Here is an example of players assigned to court 2:

In this example, on Court 2 the following four players are assigned: Dave B., Jeff R., Tim B., and Cindy L.

Once we have the Shootout Score Sheet filled out, we then provide the sheet to a leader of that court who is responsible for entering the scores for the game play on that court.

Let’s say Jeff volunteers to fill out the sheet for Court 2.

The 1st game has Dave and Tim serving to Jeff and Cindy. The game is to 11 points, win by 1 point. Once that game is over, Jeff then places the scores into the Shootout Score Sheet. Then the next game is played with Jeff and Tim serving to Dave and Cindy. The final game, Game 3, is Tim and Cindy serve to Dave and Jeff. Again, after each game is over, Jeff enters the score onto the Shootout Score Sheet until all three games are complete.

After the three games are complete, the Shootout Score Sheet for Court 2 will look something like this:

Notice the game play determined which court players move to for round 2. Games wins are most important, so referring to the same sheet, Dave B has more wins than the other players so he is marked to move up. The other players have one win, but Cindy has more total points, so she is marked to move up to Court 1 as well. The other two players are assigned to Court 3 to play their second round. If you are using a Five Player Shootout Sheet, two players move up, two players move down, and one player remains on the court.

After two Rounds are played, the Shootout is completed and all sheets are given to the organizer. The sheets are eventually given to the person responsible for entering data into the system.

After we have collected the shootout sheets at the end of the shootout, then we’ll enter those results into our system.

For each player, we will enter the following three data points: “Round 1 Court”, “Round 2 Court”, and “Next Court”.

That’s it! Very Easy! After we have entered the shootout data, we will send out the official results via email. We have a “Send to” option that allows us to Email the shootout results to our players.

What happens if a player needs to leave after Round 1?

If a player leaves after the first round (e.g. they need to go to work), do not enter a “Round 2” court; leave this column empty, and instead, use the “Next Court” field. In “Next Court” enter the court # the player would have played had they stayed for the 2nd round. The player is not penalized for leaving. If a player skips round 1, and joins for round 2, leave the round 1 column empty.

Example: Player comes in, plays on court 2 for their 1st round, they played well and would have played on court 1 for 2nd round; however, the player left after round 1. In this case, enter “2” in the Round 1 column, leave the Round 2 column empty, and enter “1” in the Next court column.

How is the ranking calculated?